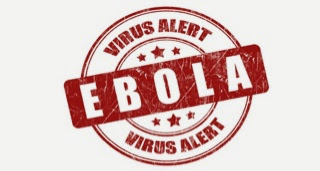 This here’s my Back and Better post. Hugs and kisses 🙂 to all my readers, friends and family alike who encouraged me to get back on my writing horse. You’re the best-est people ever.

So I’m talking about Ebola not because its so high up in the news but because it makes me cringe when I’m in a public place and I hear some incredibly wrong assumptions stated as fact and the loud misinformed arguments that ensue.
So enough of that already, here’s my effort to answer some of your common questions.
1. Where did it come from?

Fruit bats are the natural/source hosts. These animals are able to carry the infection, without being sick themselves, similar to the loving relationship between the malaria parasite and your friend the mosquito.

So the FIRST PERSONS to be infected are likely people who killed and/or ate infected/poorly cooked fruit bat-meat which is why it was first discovered in remote villages like the one near the Ebola river in DRC where the virus got its name.
Somewhere along the line, other hosts like pigs, cows, monkeys etc. which are mostly domestic or even kept as pets came in contact with the body fluids or dead bodies of other infected animals, became infected, got sick and infected their human families. This is another way non-bat meat consuming people brought the virus to the human population (secondary infection).
2. Transmission: How does the virus spread among people?
Once ONE human being is infected, the person to person transmission rates are much higher. You can get infected from touching or being touched (splashing, needle pricks etc) by an infected person’s body secretions such as blood, semen, vaginal secretions, breast milk and even mucus, saliva and sweat. So having intercourse with an infected person can guarantee a transfer of the virus.
Ps. Its not airborne so breathing the same air as an infected person wont make you catch the virus.
3. Prevention:
Cook your meats thoroughly, wash hands with antiseptic soap or any available soap after touching/ caring for any sick friends or family (even if you don’t think they’ve got ebola). You should also wash your skin after killing sick or otherwise healthy looking animals and purchase your meats from reliable sources.
Medical personnel should practice proper infection prevention procedures.
4. Is there a cure?
No there isn’t. There’s also a very slim chance of survival about 10%-50%. So a death rate of 50-90%. Those who survive are at best described as lucky and early detection helps improve survival chances.
5. Symptoms:
Symptoms start within 2 days to three weeks of being infected. Stage 1 Symptoms include: fever, intense weakness, muscle pain, headache and sore throat. This is followed by vomiting, diarrhoea, rash, impaired kidney and liver function, and eventually, both internal and external bleeding.
Unfortunately, the early symptoms are hardly useful for identifying Ebola disease and are often mistaken for flu, malaria, cholera and even typhoid, leading to more people getting infected while caring for the sick.
6. Treatment:
Treatment involves managing the patients’ symptoms. Its called supportive therapy, eg. for the pain and fever-analgesics, dehydration-ORS or IV rehydration etc and lots of prayer7. Are there no drugs for preventing or treating Ebola?:
In a nutshell, no effective medicines have been completely developed for man’s use. A few experimental drugs exist, but they are far from being ready for use. A part of the problem surrounding drug development for ebola, is the geographical spread of the virus which since its discovery in the 1970’s has been confined to tropical regions of sub-saharan africa like DRC, sudan, Uganda, Liberia, Sierra Leone and most recently Nigeria. However, with the size of this  recent epidemic, the possibility of more investment and fast tracking in ebola drug development has gone up several notches.

Even though the situation seems bleak, let’s remember that there was a time when measles, cholera etc were treated as epidemics and yet the drug people (pharma companies and their researchers) found a cure. We are resilient and have the tendency to survive  every time. I pray for our brothers and sisters in sierra Leone and Liberia who are hardest hit and i hope the ebola storm passes soon. As for my brothers and sisters in Ghana who have closed their air borders to Nigeria, in the words of my first lady I say: “THERE IS GODOOOOO” 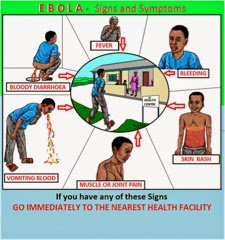 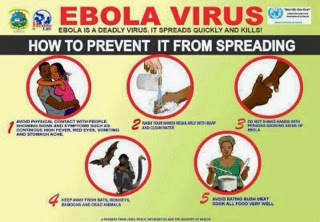 See you next week. xoxo.