Health matters by Pharmacist Reny
Home sex Is she a virgin?

Did you know that not every woman will bleed the first time they have Vaginal intercourse. Do you know that this absence of blood does not reduce or delete the authenticity of their lost virginity? Here’s why:

Rule 1: All Vaginas Are Not The Same

There are many myths and expectations about female sexuality and virginity and it’s too bad because it makes many men suspicious of women, or to have some unmeet-able expectations and this suspicion can cause problems in relationships and marriages.
Even gynecologists – who are very familiar with thousands of women’s vaginas ?  – can not always tell if a woman is a virgin or not, and by that I mean whether or not a woman has had vaginal intercourse before. This is because, not all girls are born with a hymen, that tissue that partially covers a girl’s vaginal entrance. Natural absence of the hymen is not an abnormality or illness and should therefore not be the basis for judging girls’ morals which is why I was so annoyed when I read about a South African educational board which chose to screen girls applying for a scholarship on the basis of their ‘virginity’ and not solely on their academic or athletic or artistic skills as would have been done for the boys.
Even among girls who are born with a hymen, some may be born with a very thin or small one that wears away from childhood to adulthood, either just as a natural occurrence or through masturbation or tampon use, exercise or horse riding. On the other hand, some girls are born with a bigger or thicker hymen such that when they first have intercourse, they will bleed more than other girls.
History
Throughout history, non-virgins (sexually experienced women) have used their experience to pass themselves off as virgins with more drama and success than the virgins themselves. They can package it better, the right dose of shyness, squirt chickens blood in the right spot, and shriek with serious pain when he enters. Unlike them, most virgins have been told by their mothers and society that they must bleed during first vaginal intercourse,  so many are shocked when nothing happens (no bleeding or when the bleeding is not like one cup full of blood or the pain is not intense) and begin to think there’s something wrong with them. Wake up sister, the only thing wrong is the difference between myth and reality.Dear virgin-seeking man
Don’t you think that every man aching to marry a virgin, should at least be a virgin as well? But male virginity is usually something men are embarrassed about and this shouldn’t be so. If you’re a male virgin, you are not going to lose the ability to use your penis because of years of non-use, so don’t listen to that lie. One question i asked a group of Dads who ask their sons to go out there and lose their virginity, who are your sons supposed to have sex with? One of your daughters!I understand that many men see virginity as a means of verifying a woman with good sexual morals or a clean sexual history, but if this were true, and all women were once virgins, then everyone should have had only one partner and never cheated. The reality is that there are as many women who married as virgins who are unfaithful as there are those who were not virgins who are faithful to their male partners.Therefore, to those men who know that they have more sexual experience than they count with their fingers and toes, yet are in the church, fasting and praying to find a virgin, and to those men that will attack their wife/woman, because they did not see blood on first intercourse. I want you to know that one day you might see blood, but it may just be chicken’s blood, red ink…or you might wake up one day to realise your wife that bled for real is cheating on you and hopefully that day you will also realise that virginity should not be the most important yardstick for verifying good morals.
So what do you think about virginity now? Are you a virgin? Leave a comment for me below.

If you liked this article, don’t be stingy, share it with a friend 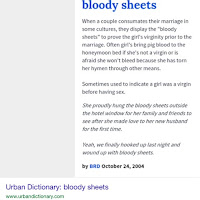