Health matters by Pharmacist Reny
Home health Are you having a migraine? 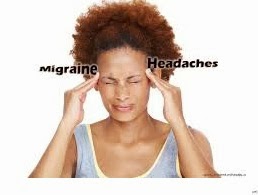 A migraine headache is a chronic condition with recurrent attacks.  Migraine headache is caused by enlargement of blood vessels . This enlargement stretches the surrounding nerves causing the release of chemicals from nerve fibre. The chemicals cause inflammation, pain, and further enlargement of the artery which then magnifies the intensity of the pain many times more than the common headache.
SYMPTOMS
Most (but not all) migraine attacks are associated with headaches. Migraine headaches usually are described as an intense, throbbing or pounding pain that involves one temple. (Sometimes the pain is located in the forehead, around the eye, or at the back of the head). The pain usually is on one side of the head (unilateral ), although about a third of the time, the pain is on both sides of the head (bilateral).
The unilateral headaches typically change sides from one migraine attack to the next. A migraine headache is usually aggravated by even daily activities such as walking upstairs. Other common symptoms are nausea, vomiting, diarrhea, facial pallor, cold hands, cold feet, and sensitivity to light and sound. As a result of this sensitivity to light and sound, migraine sufferers usually prefer to lie in a quiet, dark room during an attack. A typical attack lasts between 4 and 72 hours.
WARNING SYMPTOMS
An estimated 40%-60% of migraine attacks are preceded by warning symptoms lasting hours to days. The symptoms may include: Sleepiness, irritability, fatigue, depression or euphoria, yawning, and cravings for sweet or salty foods. Patients and their family members usually know that when they observe these warning symptoms that a migraine attack is beginning.
WARNING SYMPTOMS– MIGRAINE AURA
An estimated 20% of migraine headaches are associated with an aura. Usually, the aura precedes the headache, although occasionally it may occur simultaneously with the headache. The most common auras are: Seeing flashing, brightly colored lights in a zigzag pattern
(called a fortification spectra), it usually starts in the middle of your visual field and progresses outward;  a black hole in your visual field, also known as a blind spot. Some elderly migraine sufferers may experience only the visual aura without the headache. A less common aura consists of pins-and-needles sensations in the hand and the arm on one side of the body or pins-and-needles sensations around the mouth and the nose on the same side. Other auras include hearing hallucinations and sensing abnormal tastes and smells.
DIAGNOSIS
Migraine headaches are usually diagnosed when the symptoms described previously are present. Migraine generally begins in childhood to early adulthood. A family history usually is present, suggesting a genetic predisposition in migraine sufferers. However, adult patients with the first headache ever, worst headache ever, a significant change in the characteristics of headache or an association of the headache with nervous system symptoms, like visual or hearing or sensory loss, may require additional tests to exclude diseases other than migraine. The tests may include blood testing, brain scanning (either CT or MRI), and a spinal tap.
I would advise you see your doctor if you think you might be having or have frequently had any of these symptoms.